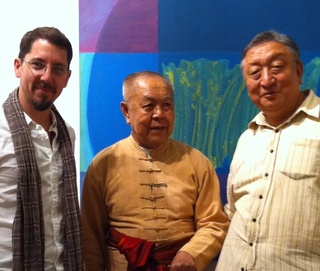 presents:
Engaged Buddhism in the 21st century
Sulak Sivaraksa in conversation with Matteo Pistono
with introduction by Mr. Lodi Gyaltsen Gyari, Special Envoy of His Holiness the Dalai Lama

Sulak Sivaraksa is a remarkable and multifaceted Thai intellectual, social critic, and Buddhist leader whose work for peace is exemplified by courage, determination, imagination, and the constant inspiration of the core principles of his Buddhist faith. Sulak has helped to change the views of political leaders, scholars, and young people, in Thailand, Asia, and the world, encouraging a new understanding of peace, democracy, and development. He challenges accepted approaches that fail to give priority to poor and politically marginalized citizens. He has, over a lifetime of dedicated service and unflagging commitment, given new life to ancient Buddhist teachings about nonviolence and about peace and justice. Sulak received the Right Livelihood Award in 1995 and in 2010 'for his vision, activism and spiritual commitment in the quest for a development process that is rooted in democracy, justice and cultural integrity," and in 2011 he received the Niwano Peace Prize. His Holiness the Dalai Lama has said of Sulak, "I believe Sulak and I share a conviction that if we are to solve human problems, economic and technological development must be accompanied by an inner spiritual growth. And if we succeed in fulfilling both these goals, we will surely create a happier and more peaceful world."

Matteo Pistono is the author of In the Shadow of the Buddha: Secret Journeys, Sacred Histories, and Spiritual Discovery in Tibet, and writes for The Washington Post On Faith and the Kyoto Journal, among others, on Tibetan and Himalayan cultural, political, and spiritual landscapes. He is presently writing the biography of the prominent Thai Buddhist intellectual, Sulak Sivaraksa.

NOTE: This lecture will be webcast LIVE at www.ustream.tv/channel/ict-lecture-series
Questions and comments can be emailed to comments@savetibet.org