Tags: In the Shadow of the Buddha, extract, Richard Gere 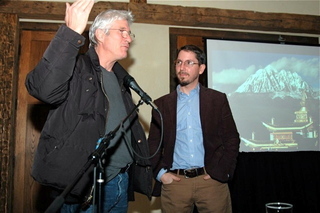 Richard Gere & Matteo Pistono speaking at the book launch in upstate New York
With a nod of gratitude to Richard Gere, I thought I would post an extract from “In the Shadow of the Buddha” where I write a bit about how Richard effectively communicates the critical message from Tibetans inside Tibet to those in position of political power around the world. It is people like Richard and other human rights advocates who continue to press governments around the world to call on the Chinese government to stop their repressive policies in Tibet and cease their gross human rights abuses.
---------
March 2002, Year of the Water Horse
Washington, D.C.

Stale air hung in U.S. House of Representatives’ Rayburn Hearing Room. Maybe it was the tie and jacket, perhaps the central heating, or the fact that there was a ceiling where I was used to endless sky. Members of Congress took their seats in an arc that stretched the length of the room. Photographers jockeyed for position as they shot from the floor to accompany the next day’s headlines. Hundreds of foldout chairs were jammed behind three experts testifying. A large group of congressional staff and the public waited impatiently in the hallway, trying to get in for the few standing-room-only positions.

The crowd was not gathered because all the congressmen on the com¬mittee were present at the hearing, an uncommon occurrence. Nor was it because this was a hearing on U.S. policy considerations on Tibet. Rather, the best-known Buddhist associated with Tibet, after the Dalai Lama, was present. Richard Gere had just flown in from a Toronto movie set to testify on religious persecution in Tibet.
Read More
1 Comments

Things seem to get even tougher in Tibet as time goes by – my heart really goes out to them. Here in France I, a Westerner, have the opportunity to freely practise Buddhism―how extremely sad and grossly unjust that the Tibetans themselves cannot.

My gratitude to you, and Richard Gere, and others who care for Tibet and the Tibetans in this way. As Buddhism continues to flourish in the West we have so much to thank Tibet for .....

I hope your book will inspire many, many people to take the Tibetan cause to heart ―and not allow it to remain forgotten until Tibetans are able to freely practise their religion.

Tags: In the Shadow of the Buddha, Dalai Lama, extract, book 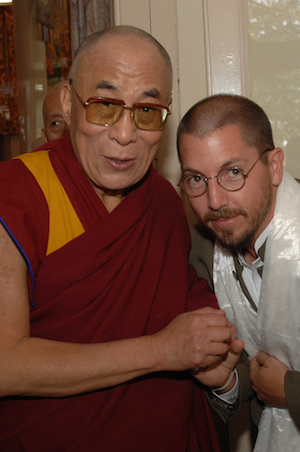 His Holiness and Matteo in Dharamsala in March, 2008
I endeavored to tell two stories in “In the Shadow of the Buddha.” The first story is the mystical life of Tertön Sogyal, a tantric practioner from the 19th century who was called to assist the XIII Dalai Lama and the Tibetan nation in a time of great need. The second story was that of my own travels in the mystic's footsteps, as well as to shed light on the repressive circumstances that Tibetans find themselves living today under the Chinese government.

As I was finishing the writing of “In the Shadow of the Buddha” I respectfully requested His Holiness the Dalai Lama (the XIV) to write a word or two about the book. I sent the manuscript to Dharamsala. Some time later, I was honored and blessed to have His Holiness write the following:

“This story of Matteo Pistono’s quest to visit places in Tibet associated with Tertön Sogyal, the adept who was a companion of the thirteenth Dalai Lama, is revealing not only of the Tertön’s life but also  Read More
1 Comments

This was exactly what struck me and made me to understand at the end of your book, Matteo: this kind of continue connection Tertön Sogyal had with the XIIIth Dalai Lama and the present reincarnation of Tertön Sogyal, our beloved master Sogyal Rinpoche, who is continuing to support the view and work of the XIV Dalai Lama in preserving the Tibetan culture as much as for the Tibetan people as for the Westerners. Through your book I understood once again, at a deeper level, what these amazing masters are bringing to the world in terms of peace, compassion and wisdom.

Peter Gabriel, musician and human rights advocate, on "In the Shadow of the Buddha"

Tags: In the Shadow of the Buddha, extract, book, Peter Gabriel 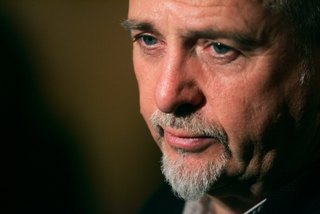 Peter Gabriel’s music and lyrics have impacted me deeply. More than twenty years ago at an Amnesty International rock concert I heard him sing ‘Biko’. That song was an introduction to Stephen Biko and to human rights abuses around the world. But perhaps more importantly, listening to that song was a call to act to combat such abuses.

I wrote about that day in “In the Shadow of the Buddha”:
------
“I first came to know about human rights when I was sixteen at a music concert in Italy in 1988. I was attending high school as an exchange student in Ravenna, the same year Amnesty International’s Human Rights Now! concert toured the world with Bruce Springsteen, Sting, and Peter Gabriel headlining.  Read More
Be the first to comment

Richard Gere's foreword to "In the Shadow of the Buddha"

Tags: In the Shadow of the Buddha, Richard Gere, extract, book 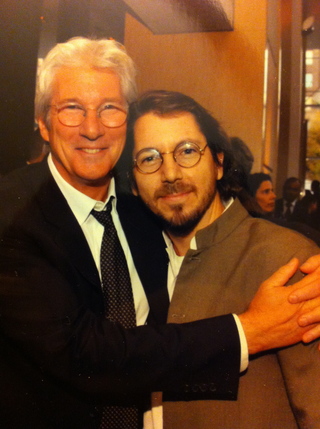 For more than a decade, Matteo Pistono has lived in Nepal and Tibet, and worked in the fields of human rights and religious freedom. He knows the territory well, and it shows in both the grit and scope of his narrative. In the many years and many places that I’ve known him, from India to Washington, Matteo has remained an informed, reliable, skillful, and joyously energized individual. He is a true student of Buddhism, and has had the great fortune of having received significant teachings from some of the world’s greatest teachers, including His Holiness the Dalai Lama, Sogyal Rinpoche, and the late Khenpo Jikmé Phuntsok inside Tibet—a rarity indeed.

The book you hold in your hands is the story of how great spiritual practitioners from Tibet, like the mystic Tertön Sogyal, and the thirteenth and fourteenth Dalai Lamas, are able to bring the full force of the bodhisattva commitment—the burning desire to free all beings from suffering—into whatever situation they face, including the world of politics. The experiences Matteo writes about in this context are often esoteric, but never less than deeply human. He speaks to us of the vital importance  Read More
Be the first to comment

Tags: In the Shadow of the Buddha, extract, book 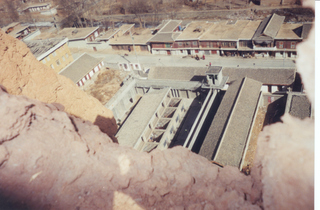 A few weeks earlier a man in Chengdu had told me about his experience of a prison in Kandze. When I met the man, half Han and half another ethnic group I did not recognize, he was fixing a flat tire on my bicycle at a repair shop. He did not tell me the reason for his incarceration on the Tibetan Plateau. I thought he probably was busted for theft, but I had no way of knowing. He spoke matter-of-factly of what had happened inside the prison walls, the way only someone who has spent time in jail can do. He detailed the physical abuse in prison, even smirking at the way one particularly skinny policeman’s punches did not hurt him. Beatings and electric shock, he said, were a routine part of interrogation. He was released after a month without explanation or charge. There were pink scars on his wrists above his greasy hands, not yet completely healed.

“Handcuffing our hands to our ankles with our arms behind our back,  Read More
2 Comments

thank you , please show the world

Thank you so much for your brave deed. May the Tibetan people soon be completely free of this hideous oppression and may the Holy Dharma that has survived in exile and given hope to people throughout the world, return to blaze forth again in the Land of Snows.

May we students of Dharma, whatever our nationality, never rest until this is achieved.