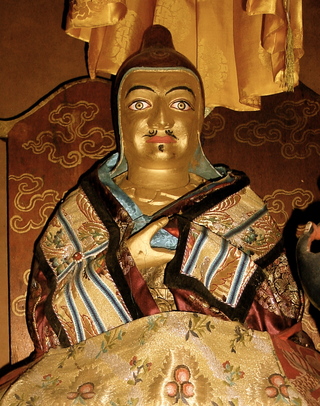 from Chapter 9 of Fearless in Tibet

In Tertön Sogyal’s 35th year, he revealed a guidebook to the Wish-Fulfilling Jewel Guru Statue, which stated, “Just as the veins of the body converge at the heart, go to the auspicious cave in the remote area of Derge where there are seven stone steps. You will see unmistakably, on the rock wall, an eight-spoked wheel. In the middle of the wheel there will be dakini script. There, behind, look for the extraordinarily blessed statue that liberates any individual who is fortunate to lay eyes upon it.”

The guide also instructed Tertön Sogyal about the astrologically appropriate date for revelation, the number of disciples who should accompany him, and the purification rituals to conduct, all of which needed to come together perfectly for the treasure revelation. The guidebook concluded, “When Guru Padmasambhava hid this statue, he entrusted it to Rahula and the naga treasure guardian named Jeweled Goddess. These two guardians will watch over the Wish-Fulfilling Jewel Guru Statue for many centuries.  Read More
2 Comments

Thank you for writing this amazing book!
Is this a picture of the WISH FULFILLING JEWEL STATUE
THAT TERTON SOGYAL REVEALED?

yes, that is the statue!