What is a Sand mandala? 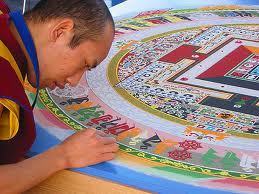 A Kalachakra sand mandala
What is a Sand Mandala?
The Washington Post July 9, 2011
by Matteo Pistono

The Dalai Lama has presided over three days of meditation, prayer, and rituals at the Verizon Center. This has included many hours of mantra recitation, complex visualization, intricate hand gestures, profound states of meditation, and ritual music and dance by monks in ceremonial costumes. These strenuous efforts by the Dalai Lama and the monks from Namgyal Monastery are believed to ritually cleanse the area of negativity while at the same time  Read More
Be the first to comment