Tertön Sogyal in Golok and collaboration with Dodrupchen Rinpoche 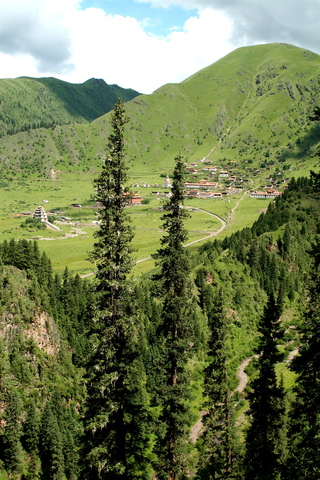 Dodrupchen Monastery, Golok
Extract from "Fearless in Tibet: The Life of the Mystic Tertön Sogyal"

Tertön Sogyal, with his wife and son and attendants, had crossed the Yellow River watershed and entered Golok. This gigantic landscape swallows travelers in dust storms and wind that can knock a sturdy Tibetan horse flat to the ground. Tertön Sogyal relied upon the treasure guardians to show the route. They steered the reins past the southern turnoff toward Kandze and ventured due east across the highland ranges with its rolling golden grasslands that extended as far as the eye could see. As they entered the sparsely populated region of southern Golok, the number of flat-roofed, stone-stacked houses in any village was no more than a dozen. Corn and barley sheaves hung among drying chilies from the three-story houses with the ubiquitous Tibetan mastiffs guarding the perimeter from sand foxes and wolves. Above the riverbanks where the barley terraces were planted, nomad children and women ran after Tertön Sogyal seeking his blessing, their devotion inspired by his tantric attire and nest of hair. In the high mountain meadows and pastures of rhododendron shrubs, and along the river basins, Tertön Sogyal’s caravan passed herds of yaks numbering in the thousands, tended by nomads.

This was the first time Tertön Sogyal had come to Golok, a region that rivaled Nyarong in its reputation of rugged nomads and roaming bandits. When locals camped for the night in Golok, horses were picketed under strong guard and men slept with their boots laced and their weapons at hand.  Read More
3 Comments

I so enjoyed reading this. Very much so. I type overlooked by paintings of Jigme Lingpa and Thangtong Gyalpo the great iron bridge builder on my wall nearby. Thank you so much for writing this book.