Tags: Khenpo Jikme Phuntsok, In the Shadow of the Buddha 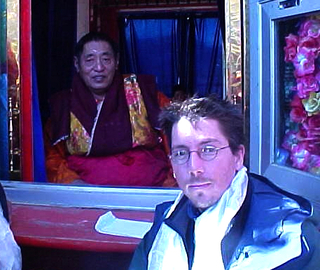 Khenpo Jikme Phuntsok and Matteo Pistono
The fire at Larung Gar on January 9th was tragic news, as have been the other fires in eastern Tibet at Kathok, Litang and a few days ago in Gyalthang. The monks and nuns at Larung Gar are as resilient as they come and I'm confident they will bounce back. The anniversary of Khenpo Jikme Phuntsok, the meditation master who founded Larung Gar, falls this year on January 15th. There will be ceremonies in his honor around the world, and in particular at Larung. At the beginning of "In the Shadow of the Buddha," I recall the first time I visited Larung Gar in 1999 and meeting the great master. That section follows below. On this auspicious anniversary, may we recall Khenpo Jikme Phuntsok's kindness and wisdom and pray that all of his aspiration for Tibet and for the world be fulfilled.

The younger monk with whom I had traveled in the bus to the encampment had space on his kitchen floor for me to sleep. We wound our way through the muddy alleyways of the encampment to his shack. Monks and nuns chanted scriptures behind the doors we passed. Smoke rose from simple tin chimneys in the homes of those who had money to buy yak dung for fuel. A few refugee dogs were curled against the doors of some of the huts, trying to stay warm.  Read More
Be the first to comment