Paperback launch of 'In the Shadow of the Buddha: One Man's Journey of Discovery in Tibet' at Bedford Post in upstate New York

Tags: In the Shadow of the Buddha, book launch, Richard Gere 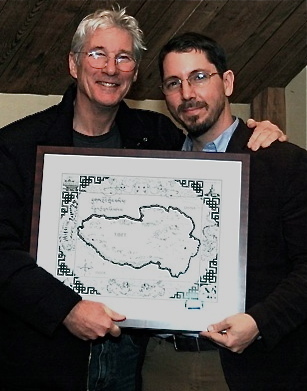 Matteo presented Richard Gere with a print of the map of his pilgrimage from 'In the Shadow of the Buddha'
“In the Shadow of the Buddha: One Man’s Journey in Tibet” was launched last night at Richard Gere’s Bedord Post Inn. The Westchester Buddhist Center graciously hosted the event where fifty people attended the slide show and book discussion. I was pleased that Richard Gere, who wrote the foreword to the book, came for the event.

I was able to thank Richard for his support for the book project and for my non-profit organization, NEKORPA, by giving him a framed print of the hand drawn map of Tibet that is in the book.

The drawings in the four corners of this map are of the pilgrimage sites found in "In the Shadow of the Buddha": which are the Jokhang Cathedral in Lhasa, the Enlightenment Stupa of Tertön Sogyal at Nyagar, Kalzang Monastery in Nyarong, and the Cave That Delights the Senses at Tsadra Rinchen Drak near Palpung in Eastern Tibet.

The spiritual geography of the map developed over the years of pilgrimage in Tibet. And the first part of the journey I wrote about in the early part of the “In the Shadow of the Buddha”:
---
When I came to Kalzang Monastery, One-Eye Wangde held the keys to the iron padlocks on the door to the dusty library on the top floor of the temple. As we walked to the temple library, I held his bony elbow as his curved knuckles gripped a cane.  Read More
Be the first to comment