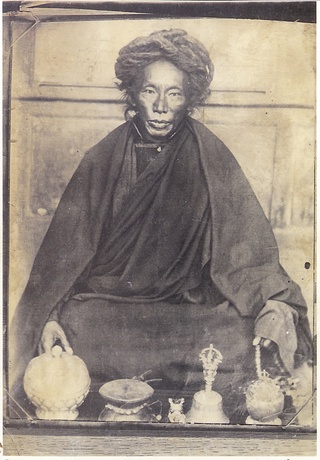 My first encounter with Tertön Sogyal was seeing this striking photograph of him at the Rigpa meditation center in London; that evening I also met Sogyal Rinpoche for the first time. I had just arrived in England for a master’s degree program in Buddhist philosophy at the School of Oriental and African Studies at the University of London. After seeing the photograph, I started asking questions about Tertön Sogyal’s life; though I spoke with lamas, Western scholars, and Tibetan historians, no one could
tell me much about him except that Tertön Sogyal was the Thirteenth Dalai Lama’s teacher and a Vajrakilaya adept. Despite knowing so little about him, I felt an inexplicable connection to the tertön. I was also drawn to Tertön Sogyal’s teachings by observing Sogyal Rinpoche’s extraordinary embodiment and example of a Dzogchen yogi, and his immense kindness in revealing Tibet’s wisdom tradition through his own teachings.

After receiving my degree in London, I went to Tibet to follow in Tertön Sogyal’s footsteps, to sit where he meditated in hermitages and caves, and to speak to lineage holders, including Khenpo Jikme Phuntsok, who helped me to visit some of the tertön’s holy sites. From the late 1990s to 2008, I traveled to Tibet a dozen times,  Read More
Be the first to comment