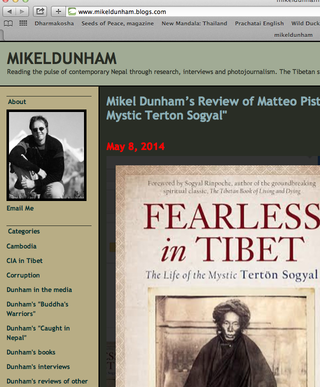 Matteo Pistono’s new book, Fearless in Tibet, a biography of the great 19th century mystic Terton Sogyal, could just as easily be called Fearless in Writing.

Until the very recent past, Tibetan biographies have been strictly hagiographic in tone and content. The readership was confined to accomplished practitioners of tantric Buddhism and the books were penned in a pre-20th century timeframe, in which empirical science played no role. Buddhist manifestations of magic neither contradicted nor compromised Tibetan readers’ experience of the “real” world. Tibetans simply lived in an atmosphere of the marvelous. If someone was said to have super-human origins or skills, no one jumped through hoops to embrace the notion. A biographer’s emphasis was on the subject’s inner journey, not the dates and place-names of his or her outer life, which was regarded as mundane, if not irrelevant.

It is no easy task, then, for a Western writer with a Western readership to bridge that cultural gap, to bring to life the story of a highly realized Buddhist master – to explore the tantric’s spiritual achievement while also folding into the narrative Terton Sogyal’s political significance.

Matteo Pistono has done precisely this.

"China’s Qing Dynasty, British controlled India and Tsarist Russia were all vying for control over the Buddhist nation."
Actually, Russia and the UK had already made an agreement in 1904 or so that UK would take Tibet and Russia would take northern Iran, neither of which happened because of WWI. India of course was under UK domination and didn't have a foreign policy.