Thomas Merton in the Himalayas; Interview with Harold Talbott 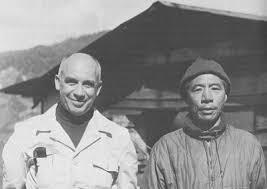 Father Thomas Merton and Chatral Rinpoche in Darjeeling, 1968
Thomas Merton in the Himalayas, An Interview with Harold Talbott
Excerpt from Tricycle: the Buddhist Review, Summer, 1992

In his best selling biography, the Seven Storey Mountain (published in 1948), Thomas Merton tells of his conversion to Catholicism and subsequent entry into Our Lady of Gehtsemani, A Cistercian abbey in Kentucky. to a world savaged by war, Merton’s embrace of a Christian life was made all the more authentic by his Cambridge-educated intellect, stunning candor, and the New York street humor he acquired while attending Columbia University.

Single handedly, he restored credibility to the very possibility of contemplative virtue which had long been denigrated by liberal intellectuals and traditional Christians alike. His was a voice of sanity, filled with sacred wonder, and replete with inquiry and contradiction.

Merton appreciated perspectives refined by their distance from the society and considered them essential to maintaining the health of the community.  Read More
1 Comments

I wonder if you realise how important this interview is in the biography of Merton. It is the only time, as far as I know, that he stated he had had a son by the "bedder" at Cambridge. Elsewhere it is just speculation.