The photograph of Tertön Sogyal by Alak Gurong 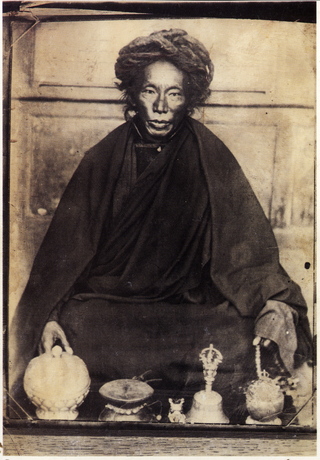 Jentsa and Xining, Northeastern Tibet
Year of the Water Ox to the Wood Tiger, 1913–1914

One chilly morning, Tertön Sogyal told his host he needed to go to Nyenbo Dzari Lake to conduct a ritual. Alak Gurong and a few of his attendants and monks saddled the horses and they left straightaway. Arriving at the high mountain lake known for its medicinal qualities, the group made camp while Tertön Sogyal began a ceremonial offering of beer and juniper smoke to the tellurian spirits and treasure guardians. He instructed everyone to leave him alone and told them to walk to the center of the frozen lake and to break open a large hole. When they returned, he told them to stay at the campsite; he then walked to the center of the lake. No sooner had Tertön Sogyal arrived at the hole than he dove headfirst into the frigid water. The group ran to save Tertön Sogyal from certain hypothermia. But they could see nothing when they looked into the cold water. They did not know what to do. Worried and anxious, some began to cry. Minutes seemed like hours.

“What have we done?”

“Our refuge has died.”

As if a lion were roaring, Tertön Sogyal emerged from the lake with a rush of wind. He held in his right hand a Buddha statue and in his left hand a bejeweled treasure casket  Read More
Be the first to comment