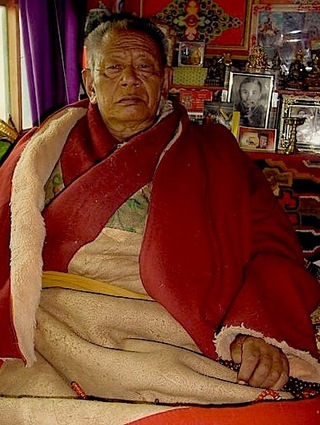 The most renowned meditation master in Tibet, Akhyuk Rinpoche (Tib. མཁན་པོ་ཨ་ཁྱུག), Jamyang Lungtok Gyaltsen (aka Drubwang Lungtok Gyatso) passed away Saturday at as his remote encampment in the highlands of Eastern Tibet. Together with the late Khenpo Jikmé Phuntsok (1933-2004) of Larung Gar Buddhist Academy, Akhyuk Rinpoche revitalized the study and practice of Buddhism in Eastern Tibet beginning in the 1980s, eventually drawing tens of thousands of students from across Tibet and China to his Buddhist encampment of Yachen Gar.

I first met Akhyuk Rinpoche (pronounced Acho) nearly fifteen years ago, and continued to visit him whenever I returned to Eastern Tibet. Read More
3 Comments

A terrible loss for Tibetans, Chinese, and indeed the whole world. Thank you for bringing us closer to this master. Impermanence displayed; sadness reigns.

Now is the time for guru yoga and to direct our practice strongly that all his aspirations for sentient beings are fulfilled. Thank you for these words. For me, he was a master of undeniable miracles.

"Died" is a wrong term for such an accomplished yogi. Usual people are dyeing, and yogis, especially as high in practice as Akhyuk Rinpoche do not "die", they obtain nirvana.